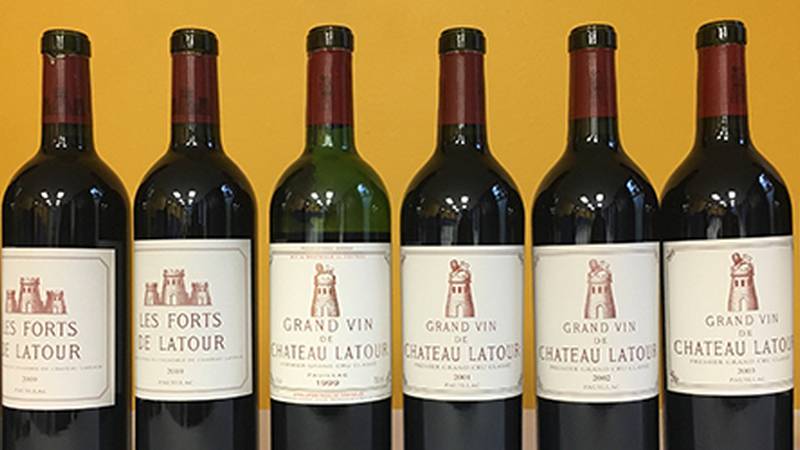 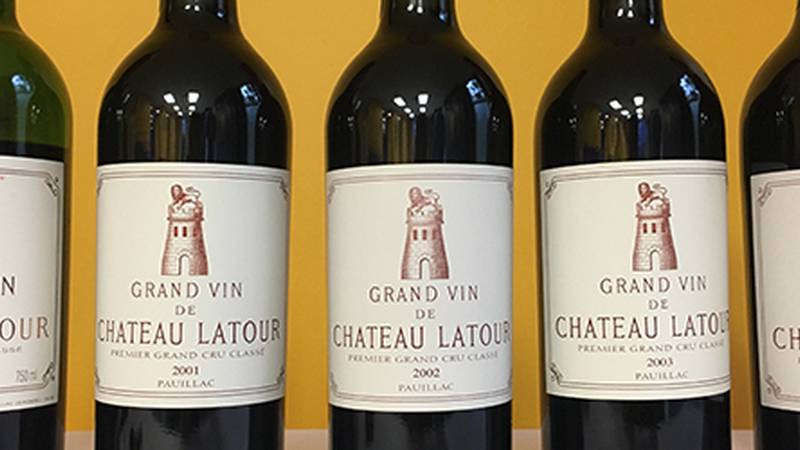 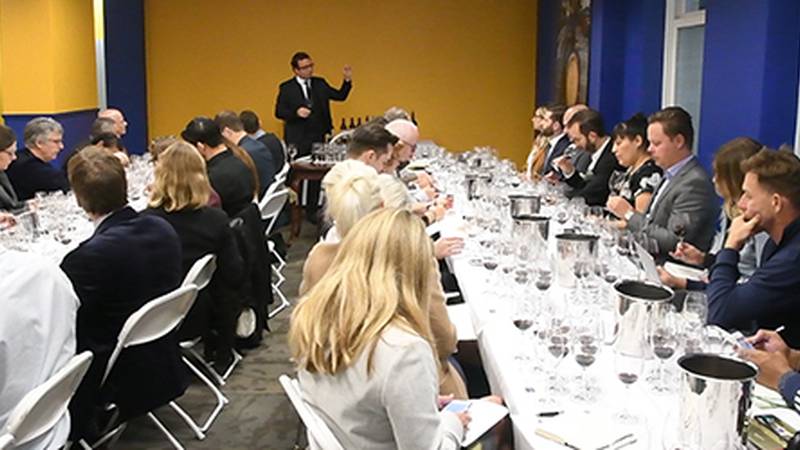 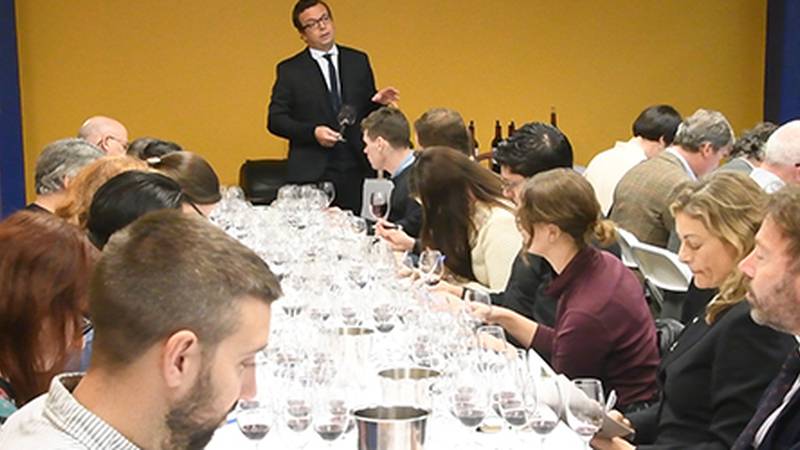 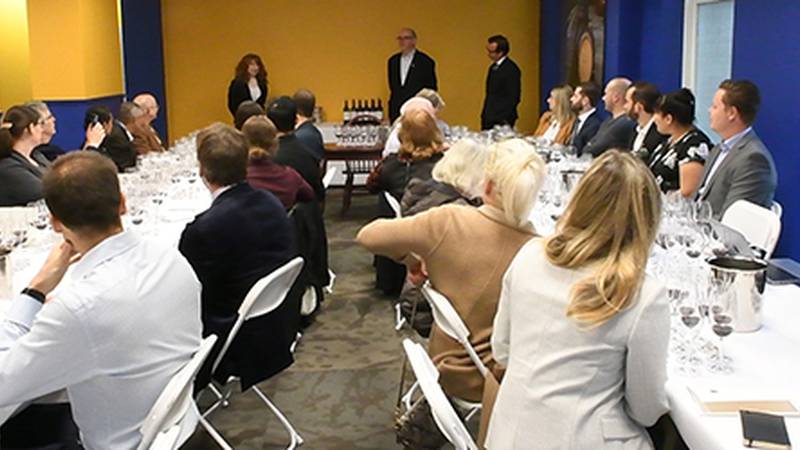 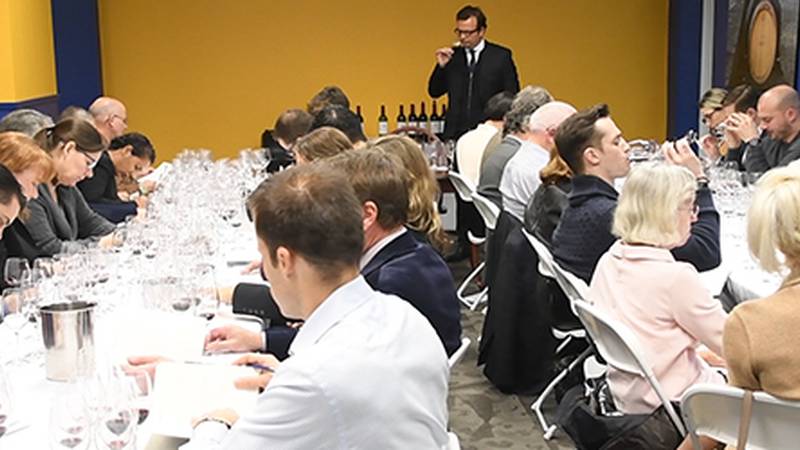 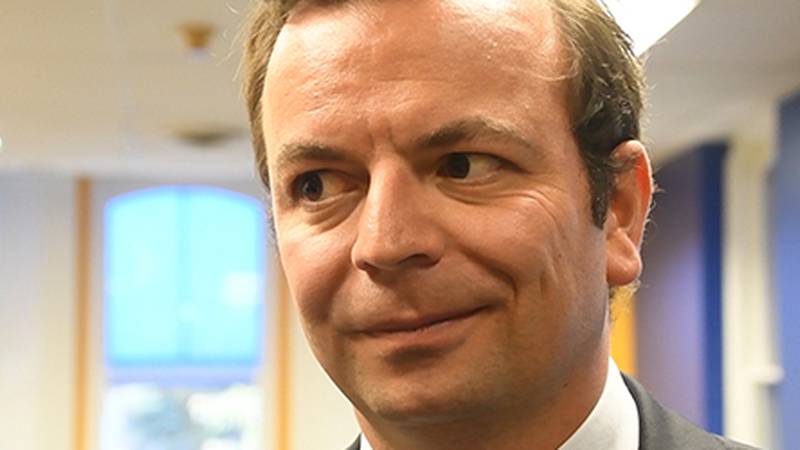 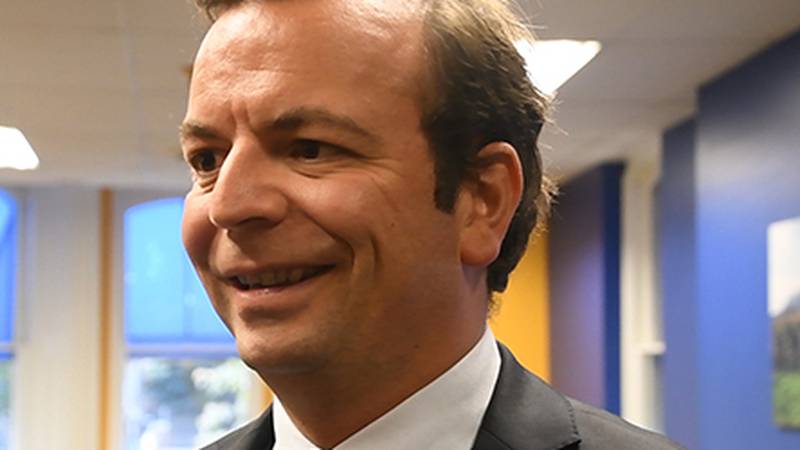 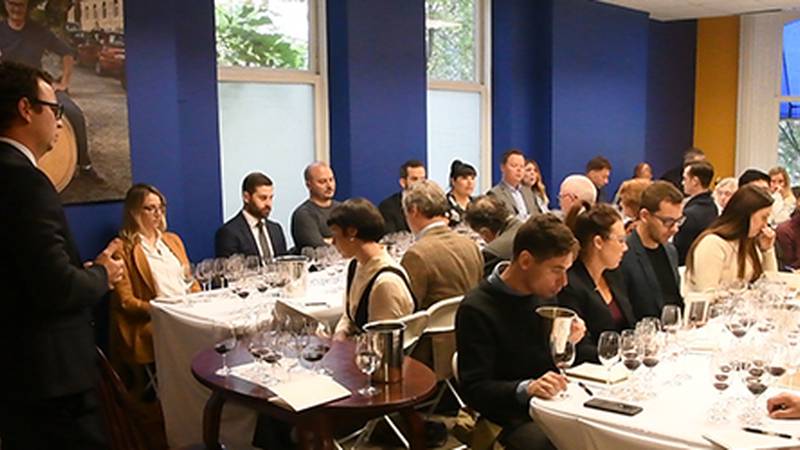 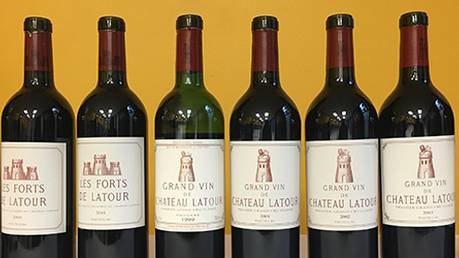 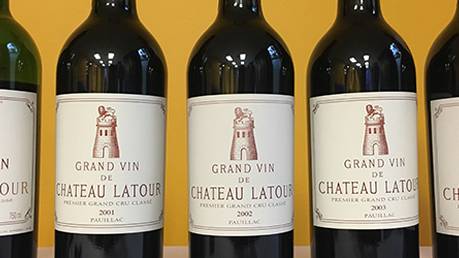 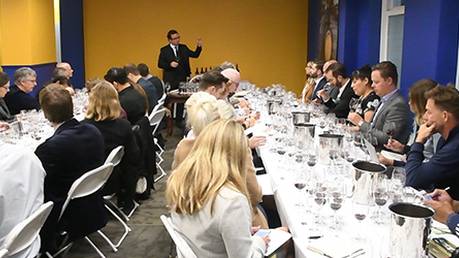 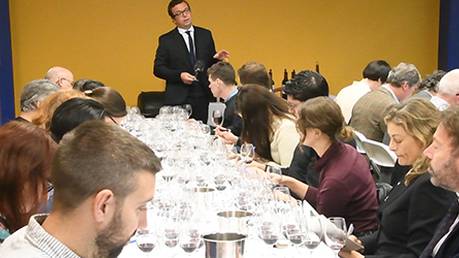 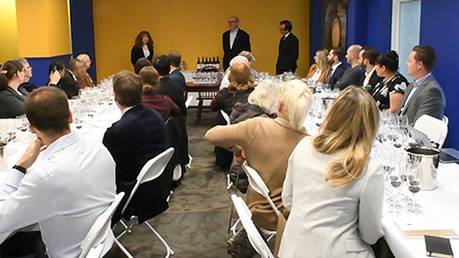 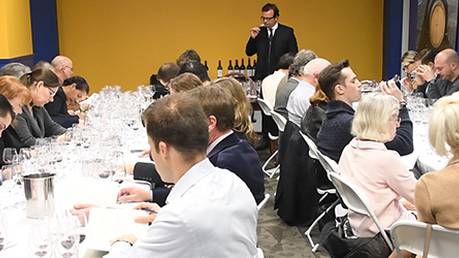 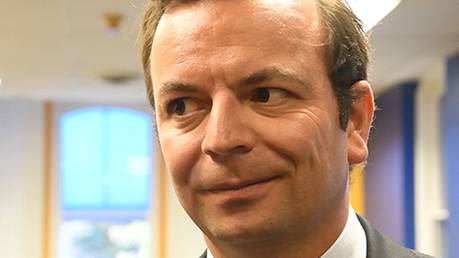 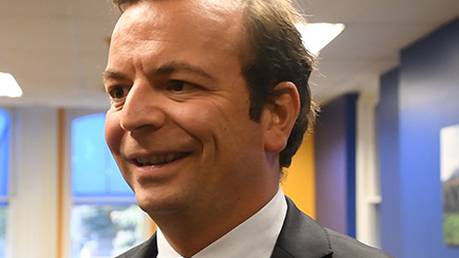 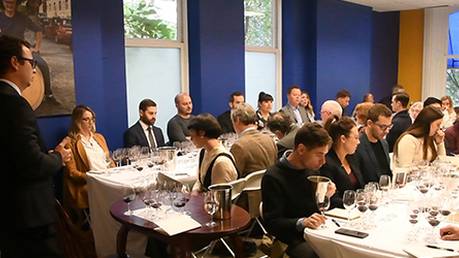 Many of Canada’s top sommeliers, writers and wine educators came to Toronto to partake in this exceptional tasting event, led by Jean Garandeau, Sales and Marketing Director of Château Latour.

Jean Garandeau (JG):  Before being a brand, you know, it is a piece of land, and I guess, the better way to sum up Château Latour is – it’s that beautiful vineyard, that unique piece of land that has been “sublimed” by people – by generations of winemakers, people walking in the vineyards and the cellars over the centuries. And this is our responsibility today - to make sure that we make the best of each vintage and before we pass this unique piece of land to the next generation.

KG: Why is it important to share these wines with sommeliers?

JG:  Sommeliers are the real ambassadors for our wines. They are the ones to explain the tipicity, the complexity, the elegance of our wines to their clients. So, it is clearly key that we can share these beautiful bottles with you guys and also - an exchange because we are also very much interested to get their ideas and their feelings and their feedback on the quality of the wines. Today they conveyed how they were stunned by the wines’ capacity to age and by this beautiful combination of great power.

KG: While tradition is important to such an esteemed institution, there is also a need for innovation. Tell us about some of the changes that are happening at Latour, (which the same week of the tasting, announced it was officially, certified organic).

JG: Tradition and innovation have always been at the centre of the game at Château Latour. We are not afraid of using new technologies or new materials – like stainless steel in the mid-sixties was a big innovation and we are not afraid also of changing the rules, for example, the decision not to sell our wines en primeur anymore – it’s a kind of innovation. Of course, it’s distribution but it’s a kind of innovation because what we are trying to do is to bring our wines at a level that will be great for sommeliers, for people who are enjoying our wines, because at least we know that the wine will show its complexity at this stage and this is key.

Going biodynamic is also a big change because we know that in Bourdeaux the climate can be a bit tricky. When we took the decision – it’s really a long-term decision - and an innovation to serve the quality.

When you have a great wine like Château Latour it’s really rare for people to come and try these wines but today we had ten different wines from Latour and we got to see them as they progressed over time. That’s really important for sommeliers - to understand the progression of wine. If you don’t get to experience a vertical tasting like this how are you ever going to understand that thing where you can differentiate wines side by side by side? So I think it was a really great educational opportunity for our somms.

Sommeliers are very busy people and so typically when we have a sommelier tasting we know that 25% of the people are not going to show up. Even though there were several other events going on today, we only had two people that couldn’t show up out of 40 - so that is truly remarkable. People wanted to be here.  They wanted to try these historic wines - for me it was one of the great tastings.

KG: I was surprised at how quiet this crowd was today.

SC: It’s kind of a religious experience when you have wines with such a history of accolades - for centuries Latour has been making great wine.

“When you get into 15 or 20 plus years with these wines, they really have an identity of terroir, of that place as well as – of vintage.”

Jennifer Heuther (JH), MS: It was amazing. I mean we never, almost never ever get to sit down and taste first growth vertical Bourdeaux, their second label and go all the way back to 1970 with them – so it was really a rare treat!  I think just the history and the pedigree of these wines is really so intriguing. It was really neat because we started out with younger vintages of course and you know you could get a sense of their personality but when you get into 15 or 20 plus years with these wines, they really have an identity of terroir, of that place as well as – of vintage.

KG:  So how would you try to describe that essence – of that Château Latour sense of place?

JH: I was really trying to zero in on it with tasting through the vertical and for me – I found some consistencies. One would have been - like a real savory note - almost a tomato leaf, persistent cedar, spice, and a hint of smoke and there was always an underlying florality, with a real, kind of mineral lift as well. You really taste the gravel from there. It was really fascinating to taste the wines through their youth when they were powerful and slightly tightly wound into something like this (the 1970 Latour from magnum) where it’s just drinking magnificently at nearly 50 years!

EM: I am so excited because I am drinking Château Latour  2001 and it was my pick of the tasting today.

KG: So out of all of those great wines – what stood out for you with this wine?

EM: I picked it because it is showing a bit of evolution and all of the parts of the wine are coming together and they are all still there.  You have got this beautiful integration – the tannins are starting to hang back a little bit and the fruit’s coming forward and it’s all still there. You have got all of the tertiary characteristics and evolution but there’s still a lot of life in it.

KG: So why is it important for sommeliers to taste these wines – why are sommeliers important?

EM:  I think what makes sommeliers so vital is that they help interpret the world of wine – they go out and do some of the exploring and they can help interpret it. So that when people are having an event or a tasting and there is a certain feeling they want to invoke or a certain flavour they want to experience – a sommelier can access that “rolodex” if you like, and bring it to life for them in the moment. I think that sommeliers create that access to the world of wine.

“Tasting such a cross section of wines like this is like having a year of school in a day.”

KG: Why did you come all the way from Montreal to be here today and what stood out for you?

CVL: I was really impressed by the opportunity to taste the full range of vintages of these amazing wines.  Tasting such a cross section of wines like this is like having a year of school in a day.  To have all of these wines lined up to taste was great – some of the old ones were, surprisingly similar to the new ones. For that reason I think the one that stood out for me, was the 2003.

KG: What was the standout wine for you, Mylene?

MP: I was pretty surprised by the mystery wine we finished with. The Latour 1970 was beautiful – the complexity, the silkiness of the tannins and the earthiness – a beautiful wine.

TA: I’m a great Bourdeaux fan. When it comes to red wine, that’s what I want to drink.  I was expecting finesse and elegance from Latour and it was there in spades. These wines are so beautifully balanced and elegant and what surprised me was how drinkable the younger vintages were. We tried the 2003, which was amazing and the 2010. These wines are truly spectacular wines and great food wines as well.

SD:  Today’s tasting was out of this world really – it’s a very rare opportunity that we get to taste wines of this caliber and wines of this vintage from Château Latour, a first growth of Bourdeaux. We had people flying in from different parts of Ontario and Quebec and it’s just such a unique opportunity and such a great honour for CAPS Ontario to be a part of this.

5 Things You Need to Know About Chateau Latour

1. It is named after a tower but it’s complicated… the original Saint-Maubert Tower doesn’t exist on the estate today and remains a great mystery. Many believe the structure used to look out over the Juillac River. There is a newer tower currently on the property that was originally a pigeon house.

2. In October 2018 Latour announced that they had become officially certified as “organic,” the very first of the original Bourdeaux chateaus to declare this status.

3. The first mention of Latour dates from 1331, with the written documentation for a tower to be built in the parish of Saint Maubert.

4. Of all the first growths, Latour is the estate with the most cabernet sauvignon, comprising more than three quarters of its vineyard. The remaining vineyards are mostly merlot along with “un petit peux” of petit verdot and cabernet franc. 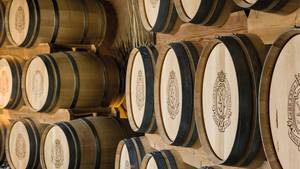 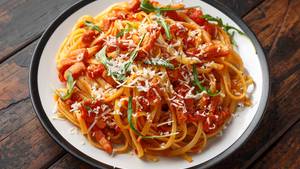 Lorie O’ Sullivan is based in Toronto. Lorie is the Sommelier/Manager for Dymon Wine Cellar a new state-of-the-art wine cellar and... 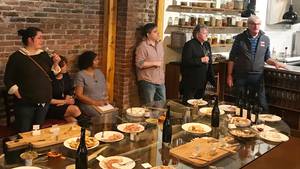 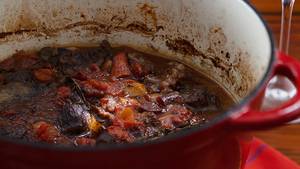 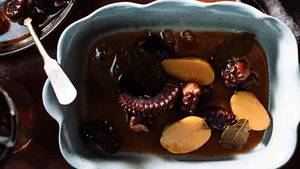 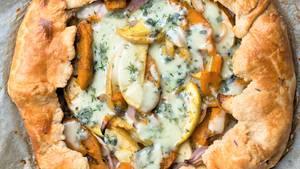